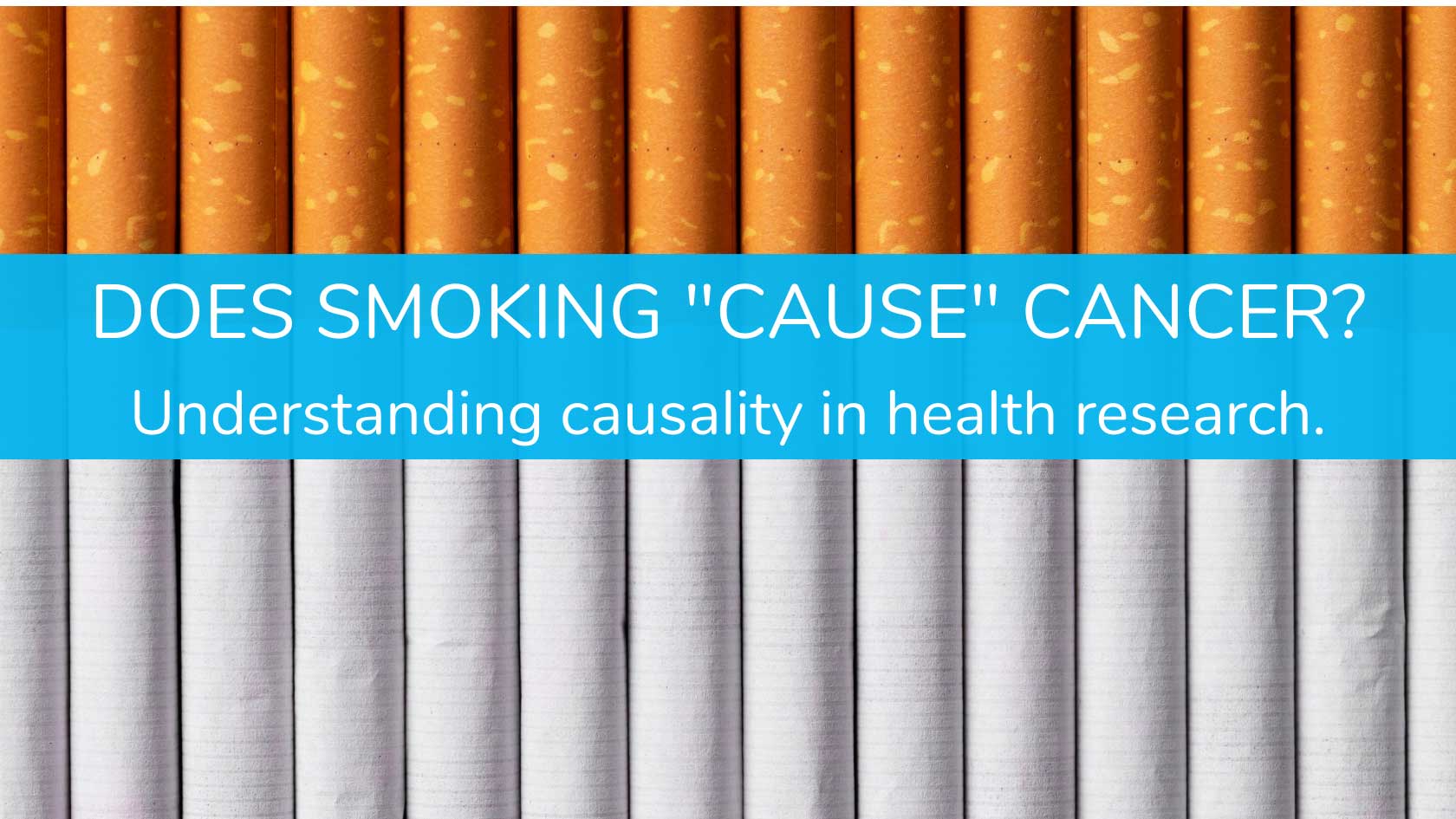 Ok, so the answer is yes. Smoking causes cancer.

But I wanted to write this article to talk about what we even mean when we use the word “cause.” In medicine and health, the word “cause” can be used in two ways

Necessary but not sufficient.

Sufficient but not Necessary.

On the opposite end would be something that is sufficient, but not necessary to cause a problem, by which I mean that the trigger causes the problem, but so do other things. An example might be the polio virus, which is sufficient, in a minority of people, to cause a case of clinical poliomyelitis (flaccid paralysis). It is not necessary to cause polio though, as exposure to toxins such as arsenic and some now-outlawed pesticides can also cause the a clinical case of poliomyelitis (https://pubmed.ncbi.nlm.nih.gov/6740077/). (The virus also doesn’t always cause clinical poliomyelitis either, as most people who contract the virus make a full recovery.)

Is smoking necessary or sufficient for Lung Cancer? It’s Neither!

And that brings us to smoking cigarettes. Smoking cigarettes is definitely not necessary for the development of lung cancer. Even though it is rare, healthy non-smokers do develop, and even succumb to, lung cancer. It is also not sufficient, because countless people have lived long, cancer free lives despite being life-long smokers.

And yet, we are comfortable saying smoking “causes” lung cancer because the probability of getting cancer is SO much higher for smokers than non-smokers. We infer (or assume without direct proof) that causality exists because of the astonishingly high increase in cancer risk that smokers have. This relative risk is captured in a statistical tool called the relative risk, which, simply put, is the ratio of the risk that the exposed group will get a disease over the risk that the unexposed group will get the disease.

We can infer causality when the associated risk increase is HUGE.

When you take risk ratios from many studies and plot them for comparison, it is called a “forest plot,” and as you can see here, the risk ratios for smoking range from high, to extremely high.

It’s a lot to take in, but the key takeaway is that smokers carry 5 to 25 times the absolute risk, or around a 500 to 2500% relative risk increase, of getting lung cancer, when compared to never-smokers. So even though cigarettes are neither necessary for lung cancer to develop (non smokers get it too), nor sufficient on their own to cause it in all people all the time (many smokers are cancer free), it is rational to infer a causal relationship.

Many things are weakly associated with cancer, but not strongly enough to infer causality

And this takes me to a conversation I had recently with a colleague, about red meat and colon cancer. This issue is already complicated because many studies lump unprocessed red meat and processed meat together, and do NOT control for variables such as what meat is eaten with. A steak with a side of spinach and a sweet potato and a glass of mineral water is very different than a hot dog on a bun with ketchup, fries, and a 32 ounce coke. People don’t eat these foods in isolation, and so it is difficult to determine which part of being a “meat eater” is to blame. Meat eaters are probably more likely to be cigar smokers and whiskey drinkers too.

But the discussion around the relationship between meat and cancer is made worse because some health organizations are willing to speak about meat and cigarettes in the same breath, as if they confer similar increases in risk. Cigarettes, we are reminded, don’t always cause lung cancer, and yet we are willing to infer a causal relationship, so surely we should be prepared to do the same with meat consumption based on similar associations (even without clear evidence of direct causation). And this is why understanding the sheer magnitude of the relative and absolute risks conferred by smoking matters. Smoking brings relative risk increases on the order of 1500-2500%, or between 10 and 25% increases in absolute risk (depending on the study). Meat consumption doesn’t come anywhere close to this. Typically, “red and processed meat” consumption is broken down by categories, such as “less than 40 grams per day” vs “more than 100 grams per day.” And when this is broken down, we see that people who eat more red meat have what amounts to a 10-20% relative risk increase for colon cancer (vs 500-2500% for smoking and Lung CA), with a ~0.4% absolute risk increase (vs 11-21% increase for smoking). In other words, being a high consumer of red meat carries 1/20th to 1/80th the risk for cancer that smoking brings. Do you see how these two things aren’t remotely comparable?

Correlation does not equal causation.

When there are correlations between things, we have to be careful about assuming a causal connection. More Americans today say they exercise weekly than did Americans in 1900. Americans are also sicker today in many ways (obesity, diabetes, etc). Exercising appears to be correlated with obesity on a society level. Do we infer that exercising causes obesity? People who consume caviar regularly are also FAR more likely to be wealthy than impoverished. Do we think caviar consumption causes people to be wealthy? Of course not. The first rule in health statistics is that correlation does not equal causation, and those two examples help us understand why. Two things can be “correlated,” meaning they tend to happen together, but they may have no causal relationship to each other. Caviar consumption might be loosely correlated with owning a jet, but obviously eating caviar doesn’t cause one’s wealth to increase to be able to afford the jet. So when we see a correlation between two things, we have to ask “could this be explained by other phenomena?”

Incidentally, the two main classifying bodies who categorize things as carcinogens place “processed” meat alongside smoking as a “Level 1 Carcinogen,” (something that does or probably does cause cancer) but this group also includes direct sun exposure. The costs of eliminating sun exposure from your life are quite staggering, and worthy of another blog post. Suffice to say, we probably all get too little sunlight, not too much.

Level 2a carcinogens include red meat … and hot beverages like tea and coffee.”

Both organizations also categorize unprocessed red meat as a “Level 2a Carcinogen” (may cause cancer) alongside “very hot beverages” served at greater than 149 degrees, which includes pretty much any hot cup of coffee or tea. This is only to suggest that these categories are in fact quite broad, and reflect only the amount and quality of evidence for risk, not so much the actual likelihood that any one thing in the category causes cancer. We might have many well conducted studies that show an incredibly tiny but consistent increase in the risk of mouth cancer that is associated with hot beverage consumption. The Level 2a classification speaks to the amount of data we have, not to how big the risk is.

Now, this doesn’t mean I’m telling you to go eat Slim Jims. Nor am I saying it’s “case-closed” on meat consumption. But I do want to empower you with the right framework to understand how relative and absolute risks differ, as well as with an understanding of what is meant when we say things “cause” disease. You will see articles written all the time that say that certain people (let’s say people who play sudoku) are 3 times as likely to contract such a disease (let’s say astigmatism). Now, you’ll know to look for just how great the absolute risk is. If it shows that your chances go from 2 in a billion up to 6 in a billion, you can breathe easy and continue to enjoy your sudoku puzzles, knowing that a 0.0000004% increase in risk probably isn’t worth batting an eye at.

When we are trying to make healthy lifestyle choices, we very often won’t be able to rely on conclusive evidence from studies, because no controlled studies over years have been done to prove how much sleep to get, or how many apples to eat for optimal health. Instead, we are almost always left with very thin associations of risk, which as I’ve said, may not be strong enough to support firm conclusions. Instead we need a framework for how to make health decisions based on reasoning from first principles, using our understanding of anthropology, natural selection, and ancestral ways of living and eating. Stay tuned for more thoughts on how to build such a framework.