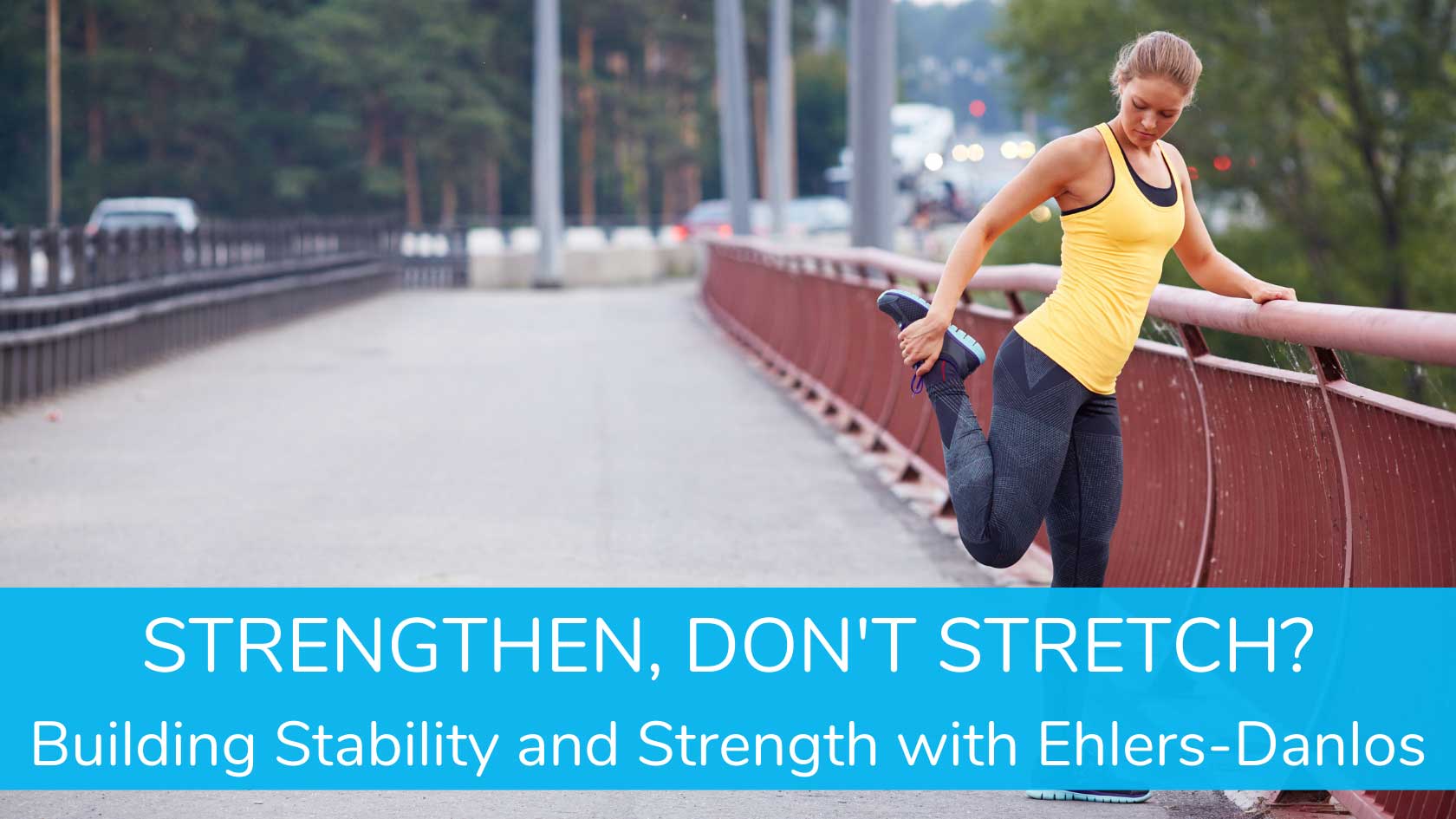 This is the first article in a series on making exercise safer and more sustainable for individuals living with hypermobility conditions such as Ehlers-Danlos (EDS). It is not intended to be a comprehensive resource about EDS, nor its treatment.

It feels good to stretch. Can’t I just keep doing that?

“How do I know that the workout was good unless I sweat?”

Because they are often very flexible, people with EDS tend to enjoy stretching exercises, yoga, pilates, and other activities involving bringing their joints into extreme ranges of motion. The sensation of tension and tightness that can be felt during these activities is soothing to people who often feel that their joints are loose or unstable. Gentle stretching probably isn’t harmful, though repeatedly forcing one’s joints into the extreme limits of their motion can promote laxity (a lack of structural integrity).

Flexibility is actually a game of dynamic stabilization. When you touch our toes, you may imagine that your muscles just completely relax, and that you are limited by how long these muscles are. Similarly, if we stretch, we imagine our muscles might grow longer, but this is actually NOT what happens.

In this sense, training flexibility is a bit like standing on a very tall platform. When you first do it, you may panic if you get within even 10 feet from the edge. But if you have to work up there regularly, you’ll become desensitized to (or get used to) the threat of danger from being up high. You won’t panic so much, which means your nervous system is willing to let you live a little closer to the edge before sounding alarm bells. This is the best way to understand what happens as you stretch regularly – your body is “letting” you live closer to the edge of your joints’ limits.

So, stretching mainly changes the nervous system, not the muscles. In order to actually change the real length of the muscle, on the other hand, heavy loads applied by other people or machines are typically required. And these loads aren’t safe for people with joint laxity.

With EDS, the nervous system can permit too much motion, until problems develop.

With hypermobility disorders, sometimes the opposite happens. The nervous system starts out *too* comfortable living on the edge of the cliff, which may be due to insufficient signaling between connective tissues and the brain. We do know that muscle recruitment is frequently atypical in people with EDS, with some muscles recruiting too little or too late, while other muscles recruit too much or too soon. For example, the thigh muscles (quadriceps) which are the most important shock-absorber for the knee, show reduced force production in patients with EDS, which places greater demands on the hips. Rather than producing passive tension to prevent joints from being overstretched, the muscles in a person with EDS may remain too relaxed as the person stretches to their end range of motion. Without the dynamic control that muscles provide, the already vulnerable joints become over-stressed. The connective tissues in our shoulders, hips, knees, and other joints are forced to absorb more of the forces of everyday life, because our nervous systems aren’t properly recruiting muscles to protect these joints.

If issues from hyper-mobility develop, the nervous system can become overprotective.

Eventually, the pendulum can swing too far back in the other direction. As the body perceives a lack of strength around a joint, the nervous system can react by becoming too cautious, causing muscles like the hamstrings to be very tight This is how the body tries to avoid getting pushed back into a range of motion where there isn’t enough strength to be safe.

Tight muscles should be strengthened, not stretched.

Now, don’t get me wrong, I’m not saying stretching is always bad. It’s just that stretching isn’t like the solution to a nervous system problem.

Imagine a 20 year old college soccer player who is out walking their Rottweiler. Now imagine an 82 year old with osteoporosis walking the same dog. Who do you think is going to be holding onto the leash more tightly? The young athlete can afford to give the large dog some slack, because if it yanks on the leash, she can quickly restrain it. The 82 year old, however, can’t risk giving the dog any slack, because if it tugs on him, he’s likely to fall and get badly hurt.

This is how our nervous systems can behave. If we have plenty of strength around a joint, our neuromuscular systems are more likely to be permissive, allowing our muscles to relax. If we are very weak, the same system is likely to protect us by locking up or being in spasm, to prevent us from getting anywhere near a risky position.

People with Ehlers-Danlos tend to have decreased tendon stiffness, and we have clear evidence that resistance training actually improves the tendon stiffness of those with EDS. On top of this, we know that people with EDS tend to have less muscle strength, which contributes to a vicious cycle. Weakness leads to inactivity (we avoid what is hard/uncomfortable), which leads to more weakness. Everyone loses strength and muscle size as they age (unless they do strength training).

But researchers at the Belgian University of Ghent found that, over 8 years, people with EDS lost more muscle strength endurance when compared to those without EDS. This was particularly noted in the quadriceps muscles of the thighs that stabilize the knee. The EDS group lost a significant amount of muscle density in their legs as well, when compared to the controls. The take-away is that weakness begets inactivity, which leads to more weakness, unless we take decisive action to break the cycle.

Resistance Training is the best way to improve both joint strength and joint control.

And this is why resistance training is the best tool we have to not only control lax joints, but prevent muscle spasms. By improving the motor control around the joint with slow, controlled, loaded movement, and by increasing the strength of the muscles that serve to protect that joint, we can allow the body to spare the connective tissues of that joint, and be more comfortable allowing healthy ranges of motion.

And the best part is that this can be done safely, and in little time!

The key to getting stronger safely is to eliminate momentum during resistance exercise.

Imagine standing on a scale, and squatting up and down quickly. You would see the needle on the scale bouncing up and down to a huge degree. When I demonstrate this with clients, it’s very apparent that my 180 pound frame can produce as much as 270 lbs or more through the scale if I bounce quickly out of a partial squat. What this shows us is that faster changes of direction mean greatly increased forces, even though they are easier for muscles.

To get stronger safely, we want to do the opposite.

By moving weights very slowly throughout a joint’s range of motion, we force the muscles to exert precise control over the position of the joint through every degree of rotation of that joint. This places large demands on the nervous system, because slow movement, especially in the “eccentric” or elongating phase of an exercise, forces the nervous system to increase the precision with which it recruits different groups of muscle fibers within a muscle.

Think of it like “fine motor control” but for large movements and joints. By training very slowly, we force the whole neuromuscular system to master every phase of the movement, rather than producing force at the very beginning and then allowing that momentum to carry us through. The result is a greater mastery of joint position, which in turn means greater safety.

A major added benefit of moving slowly is that it makes lighter weights very fatiguing, which means that we can achieve the muscular fatigue we want without needing dangerously heavy weights. Slow movement also brings fatigue on very quickly, so we get what we want with less wear and tear and less time in the gym.

In subsequent articles, I’m going to discuss how we can mitigate against two other conditions that are so common amongst people with hypermobility disorders: Postural Tachycardia (POTS) and poor thermoregulation from dysautonomia.

For now, be optimistic! Our clients with EDS are using strength training to feel better and build more stable joints.

With a little guidance, so can you!