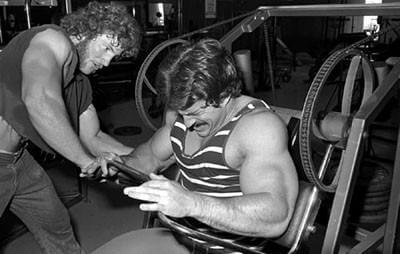 Pictured is Mike Mentzer, owner of some of the best triceps in history, on an early Nautilus Pullover. Evidence of nothing, but still cool. (Image credit strength-oldschool.com.)

Recently on the High Intensity Business podcast, Gary Knight thought that he was going to ruffle the trolls by suggesting that there is an advantage to doing a tricep press-down exercise, over and against traditional compound pressing exercises.

Gary’s suspicions are better than a hunch, and here’s why.

The triceps has three heads, and only one of those heads crosses the shoulder joint. The medial and lateral heads of the triceps originate on the humerus and insert on the ulna in the forearm, and are only capable of producing elbow extension. Thus, we would expect them to be thoroughly stimulated anytime the elbow is extending under load, as with a chest press, shoulder press, dip, etc.

If the humerus is held still, however, or if there is a flexion torque exerted on the humerus (the weight is trying to drag your whole arm up and forward), we would expect that the long head would recruit maximally, along with the medial and lateral heads, to hold the humerus still and extend the elbow. This is the case with a tricep pushdown, where the pulley is above and in front of the subject’s waist. Not only is the humerus held in place, allowing the long head to work uninhibited, but the long head can contribute to resisting the shoulder flexion that is imposed by the cable trying to drag the upper arm forward.

Another exercise that can uniquely stimulate the long head of the triceps over and against the medial and lateral heads is a pullover exercise (or a straight-arm pulldown). As I said, the long head of the triceps is a shoulder extensor, but we don’t normally see that muscle contributing to shoulder extension during exercises like row and pull-downs, because the elbow is actively flexing against resistance during these exercises. Again, if one of the actions of a muscle is antagonistic to the action you’re trying to produce, you should expect that muscle to not be able to achieve maximum recruitment during the exercise. If the triceps long head recruited maximally during a row, in an attempt to help extend the shoulder, it would be fighting the biceps and other elbows flexors as they attempted to bend the arm. But if you’re able to challenge both actions, or nullify one of them, you can get maximum recruitment, and that’s what happens with the pullover.

The pullover exercise, with its complete absence of any elbow flexion torque required, allows for intensive recruitment of the triceps long head, even though it isn’t the primary shoulder extensor. Unlike with a row, the trainee actively tries to straighten their elbow against the handles during a pullover, eliminating biceps activity and allowing for long head recruitment.

This is actually a frequent comment of clients after they first use the pullover. They report, to their surprise, unique triceps soreness in the days following their first exposure to the pullover exercise, which is consistent with the shoulder extensor function of the triceps long head.

The quadriceps is another example of a muscle that may benefit from isolation work. The three vasti originate from the femur, analogous to the medial and lateral heads of the triceps and the humerus. These components of the qadriceps exclusively act to extend the knee. The rectus femoris however, attaches on the anterior inferior iliac spine of the pelvis, and in addition to contributing to knee flexion, it acts as a strong flexor of the hip. As a flexor, it can’t maximally recruit when the hip is extending deliberately, as is the case with a squat or leg press or lunge movement. To see maximal recruitment, we might want to see coupled knee and hip knee extension with hip flexion, which is an unusual movement that few exercises replicate. However, so long as at least one joint of a two-joint muscle is fixed in place, it can can work can produce maximum recruitment at the other joint.

Thus, if the knee is held straight, then a leg raise exercise where the hip is flexing under load can lead to significant rectus femoris recruitment. This would be similar to the pullover analogy of moving the long bone on the torso. Alternatively, we can fix the humerus in space, eliminating any hip flexion or extension motion, and then perform a knee extension exercise. Since there is no hip extension component to this exercise, we would not expect to see the rectus femoris inhibited or limited in its ability to maximally recruit, and it could then contribute significantly to knee extension torque, along with the vasti. This is analogous to the triceps pushdown.

So, from a biomechanics and kinesiology perspective, it is entirely plausible that isolation exercises for the quadriceps and triceps, among other muscles, contributes to more comprehensive stimulation of those muscles. This isn’t quite the same thing as discussing special “shaping” exercises, but simply suggests that maximally recruiting all portions of a muscle will yield more maximal stimulation of that muscle as opposed to leaving one head of a multi head muscle unstimulated. In general, this principle probably applies more to multi-joint muscles.

Luckily we don’t have to settle for plausibility here. We have EMG data showing superior recruitment of the rectus femoris during a leg extension exercise versus a leg pressing exercise, consistent with the proposed mechanisms above.

Even better, this paper showed that the long head of the triceps makes its greatest contributions to elbow extension torque when the arm is at the side of the body, as is the case in the finishing position of a pullover, or in a cable pressdown exercises.

We may not have proof that adding isolation exercises guarantee more gains, but we have plausible reasons to assume it could. Remember that absence of evidence is not evidence of absence. If a study seeks to show an advantage in muscle size gains for people who incorporate isolation exercises, and it fails to do so, this only means that no advantage was seen in that specific population, over that duration, with that specific protocol. This doesn’t mean it would never work for anyone in any circumstances, and we can justify experimenting with this and other isolation exercises based on the emg data and our anatomical understanding. And if that all wasn’t convincing enough, I did chest press and pullovers two days ago, and my triceps are exhausted.